Amazing pastries! They weren't too sweet and the flavours were amazing. I loved how there was a variety of different types, and some quite unique. The sesame mousse was great, well balanced with the chocolate. Carrot cake was amazing, soft and fluffy. The cream cheese icing was not heavy and subtle enough the carrot cake remains the focus. Tarts are also wonderful. Cheesecakes are fluffy and light. Thank you for the wonderful dessert!

One of the best on the west side! Sweet E's is a very cute local business that I've heard is run by sisters. Their pumpkin pie is the best I've ever had. Thank you!

Quaint little bakery that makes a killer gluten free cake (butterscotch pecan). The 10" size was more than enough to feed 14 people. Would recommend

Amazing pavlova! Always fully topped with the season's fresh fruit and berries. Kathleen is great to deal with and she and her team came through in putting my order through before the weekend. Thank you!

History of the Pavlova Dessert 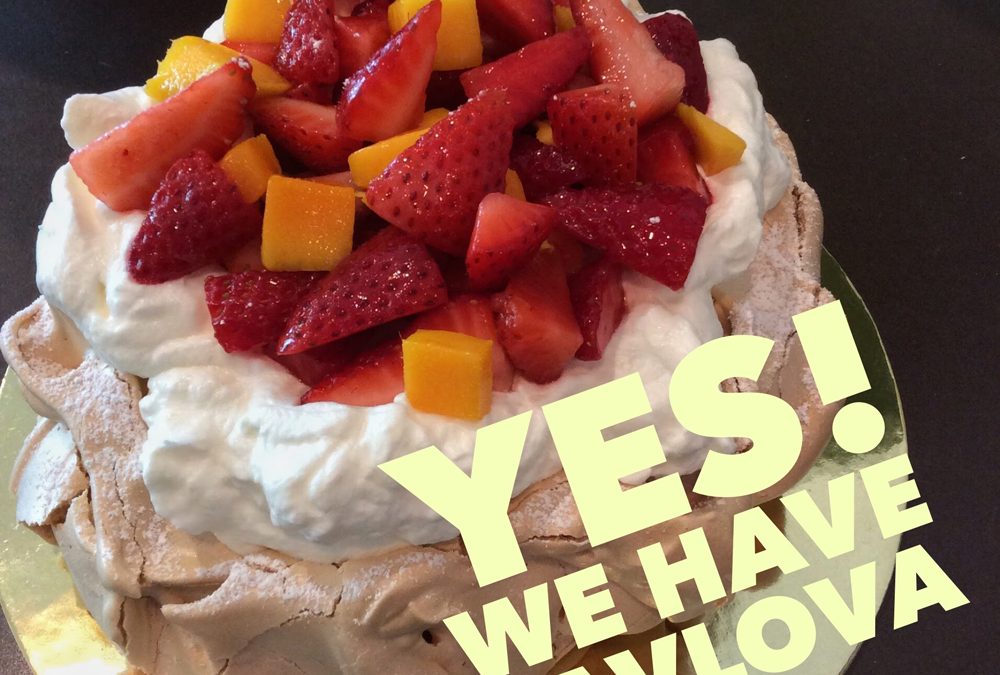 Crispy and crunchy outside, soft and sweet inside – Pavlova is a deliciously indulgent meringue-based dessert loved by people across the world. So beloved, in fact, some countries have debated being the original source of this sweet treat for nearly 100 years! Regardless of who claims the right to “first”, all agree Pavlova was created in honour of one very special person.

What is a Pavlova?

Simply put, this decadent and delicate confection is a stiff meringue usually made with very stiff beaten egg whites. These are folded with caster sugar, an acid (such as lemon juice), cornflour, and occasionally a flavour additive like vanilla extract. The whole meringue is baked until the outside becomes a crispy light brown shell, while the centre remains soft, like a warm and melty marshmallow. Many top their Pavlova with whipped cream and fresh fruit.

It can take quite a bit of practice to perfect the Pavlova. It’s very fragile, prone to deflating and breaking when exposed to cool air too fast. It’s a popular Christmas dessert in southern hemisphere countries; since the holiday falls during the Summer season in those regions there is less chance of having the “Pav” flatten. Australia and New Zealand are particularly passionate about their holiday Pavlovas.

Why is it called Pavlova?

While the exact date and country of origin are still hotly debated, almost all culinary historians agree the dessert was created in honour of Russian ballerina Anna Pavlova. Anna’s signature dance style and beauty made her world famous in the early 20th century. In fact, she was so popular she became the first ballerina to tour around the globe!

Who was Anna Pavlova?

Many fans of the Pavlova dessert may not know its name origin today. Fewer still might not realize that Anna Pavlova’s story is still a source of inspiration 100 years later. Her motivational story is one of perseverance in the face of challenge.

She was rejected at her first audition for the Imperial Ballet School at the age of nine. Undaunted, Anna auditioned again a year later and was accepted. Still, her years of training were a challenge. She had thin ankles and arched feet, which made classical ballet difficult. She was also tall with gangly limbs, in a time when most ballet companies preferred petite ballerinas.

These traits saw Anna become the target of teasing by her peers.

Again undeterred, she trained and took extra classes until her critically acclaimed official debut at age 18. All of her hard work paid off, resulting in a unique style that eschewed the strict rules of most academic ballerinas. She was adored for her “daintiness and fragility”, traits that were rare among her peers at the time. Anna eventually formed her own ballet company and set about touring the world to acclaim.

Dedicated to the very end, she refused a life-saving operation for pneumonia once she was told she would never be able to dance again. Anna Pavlova passed away a few weeks later at the age of 49. Her final words were “Get my ‘Swan’ costume ready.”

Just like the famous dessert that bears her name, Anna’s story is one of a delicate and unique beauty that could have easily folded under pressure. However, with the right amount of patience and practice, she became a popular treat beloved across the globe.

All credit goes to sweet e’s pastries and sweets

Please check that this widget Google Reviews has a Google Place ID set.